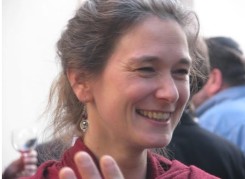 Amber Carpenter works in ancient Greek and classical Indian philosophy, with a topical focus on the metaphysics, epistemology and moral psychology underpinning Plato’s ethics and Indian Buddhist ethics. She returns continually to the question of the place of reason in the well-lived life, according to various accounts of reason, of the good, and of the reality within which life takes shape. When this is at stake, the metaphysics matters; the epistemology and psychology necessarily draw in matter to who we ought be, and how we ought to live.

While publishing on each of these ancient traditions separately, her work increasingly brings Greek and Indian Buddhist philosophy together around topics at these same intersections. In additional to particular works—for instance ‘Ethics of Substance’ and ‘Ethics of Atomism’ which explicitly bring Greek and Indian arguments into conversation with each other—her recent fellowship with The Beacon Project explored ‘Ethical Ambitions and their Formation of Character’ in Plato and in Buddhist thought; and she is currently leading a grant-funded international research group on Buddhist-Platonism.

In the Integrity Project and elsewhere, Dr. Carpenter also is interested in examining the contemporary relevance of ancient views, as well as interdisciplinary work.

Dr. Carpenter was Rector of Elm College, Yale-NUS, from 2018-2020, and Head of Philosophy from 2015 to 2017. She has co-founded the Ancient Worlds Research Group at Yale-NUS, and the Yorkshire Ancient Philosophy Network while in Yorkshire, as well as collaborating with Rachael Wiseman on the Integrity Project.

History of Philosophy Without Any Gaps, Jan. 2018: Animals in Indian Philosophy

‘Curing Through Questioning’ Conference, Oxford, May 2019: “Confessions of a Buddhist Platonist”  (China Minutes interview on Platonism and Buddhism)

(If you are interested in reading any of the texts below, please contact Dr. Carpenter via email.)