Plato famously makes psychological unity the keystone of his account of justice in the Republic. Aristotle follows by granting his phronimos unqualified consistency between practical appreciation of right and wrong, and the affects supporting and surrounding action and practical judgement.Together, they bring together the cluster of characteristics typical of integrity: integratedness; wholeness; consistency in beliefs and between beliefs and actions; steadfastness in appreciation and pursuit of the good; a commitment to virtue that recognizes no countervailing considerations. We get a picture here of integrity as perhaps not itself a virtue, because it is the precondition of virtues or the superordinate principle coordinating the virtues.

Plato’s highly metaphorical account in the Republic points beyond philosophy to the personal and the political. The psychological unity he articulates is meant to explain the powerful and uncanny character that Socrates displayed so conspicuously. And the psychological unity is presented as inseparable from social conditions and political institutions. The Hellenistic philosophers pick up on all of these themes, both in theory and in practice.

Ancient Greek did not have a word for integrity – using concerns with unity and consistency, articulated in specific ways, to do the work of conveying the phenomenon. Likewise classical Sanskrit and classical Chinese have no direct correlates to our English term ‘integrity’. Yet concern with the phenomenon, and illuminating explorations of it, can still be found. The Indian Buddhist articulation of the Path, as coordinated and progressive, and as constituting a complete and radical transformation of consciousness can be considered in this light; David Shulman suggests considering tadatmya  as a way of articulating integrity as an episode, rather than a quality of character; Mengzi and Zhuangzi are concerned with forms of uprightness that join sensitivity to the particular (rather than rule-following) with a sincere appreciation of goodness. 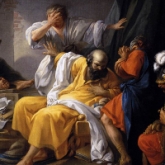