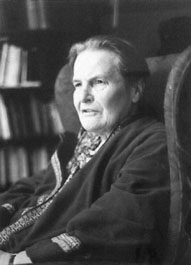 Gertrude Elizabeth Mary Anscombe was born in 1919 in Limerick, Ireland, where her father (then an army officer) was posted. After the war her family moved to the south of England. At the age of twelve Anscombe discovered Roman Catholicism when reading about the persecution of priests in England under Queen Elizabeth I. On beginning at Oxford University in 1938 she took formal instruction in the religion with a Dominican Priest, Fr Richard Kehoe. Through this she met the philosopher Peter Geach, a fellow convert. They were married in 1941 and went on to have seven children. Anscombe split her academic life between Oxford and Cambridge. She published three books and over 170 articles. She died in 2001, aged 81.

The papers for this session were all written between 1956 and 1961 and are on the topic of killing, war, and murder. None were written for professional philosophers.

‘Mr Truman’s Degree’ is the text of a speech given by Anscombe at Oxford University Senate, and later published as a pamphlet. The occasion for the speech was the decision by Oxford University to award Harold Truman an honorary degree. Anscombe objected on the grounds that, as the person who ordered atomic bombs to be dropped on Hiroshima and Nagasaki, he was guilty of mass murder; as such to award the degree would be to ‘pretend … that a couple of massacres to a man’s credit are not exactly reason for not showing him honour’ (p. 65)

‘Does Oxford Moral Philosophy Corrupt the Youth?’ is the script of a talk for BBC radio; the script was published in the BBC’s magazine, The Listener. In it Anscombe answers her question ‘No’: Oxford moral philosophy does not corrupt the youth. However, this is only because society at large is utterly corrupt and Oxford moral philosophy is ‘conceived perfectly in the spirit of the time and might be called the philosophy of the flattery of that spirit’ (DOMPCY?, p. 271). I also include letters to the editor from two Oxford moral philosophers—Hare and Nowell-Smith—objecting to the tone and content of Anscombe’s attack; and Anscombe’s (utterly non- conciliatory) reply.

‘The Influence of Pacifism’ is a section from a paper ‘War and Murder’ written as part of a collection of essays for a Catholic audience on the topic of nuclear war; Anscombe later described that paper as ‘written in a tone of righteous fury’.

In these papers Anscombe characterises the ‘spirit of the age’ as one which is practical, adverse to suffering, morally earnest, liberal, and concerned with promoting the good. Surprisingly, she argues that such a spirit promotes evil, cruelty, corruption, moralising and injustice. This is because an ethical outlook which does not include the idea that there is an absolute prohibition on certain kinds of acts—one which is in this sense ‘practical’ and ‘liberal’—will make its object promoting good and avoiding suffering rather than the upholding justice and avoiding doing evil. A person who views the world ‘practically’ will ask himself ‘What shall I do now that will promote good and diminish suffering?’ rather than ‘Is this unjust?’, ‘Is this illicit?’. Sometimes the best way to promote good and diminish suffering will be to do something evil—like murder. For example, the best way to avoid suffering and end the war might be to drop an atomic bomb on some innocent people.

For Anscombe, a Roman Catholic, the content of the prohibitions was clear: killing the innocent, sex outside heterosexual marriage, contraception, abortion all make it onto her list. For a secular reader, or a more liberal-minded Catholic, the question of whether the loss of an ethics of prohibition in favour of a consequentialist ethic is conducive to human flourishing (and to lives lived with integrity) can still be asked, even if we object wholeheartedly to the content of Anscombe’s prohibitions.

In these readings Anscombe makes some explicit remarks about the relation between the ‘spirit of the age’ — practical and liberal — and the promotion of corruption and hypocrisy.

In ‘Does Oxford Moral Philosophy Corrupt the Youth?’ Anscombe recommends three strategies to someone who wishes to ‘corrupt people by direct propagation of ideas’:

moral earnestness is pretty well indispensable. Another important thing is to keep away from facts other than those which it is standard practice to mention … A third point of method which I would recommend to the corrupter would be this: concentrate on examples which are either banal: you have promised to return a book, but … and so on; or fantastic: what you ought to do if you had to move forward, and stepping with your right foot meant killing twenty-five fine young men while stepping with your left foot would kill fifty drooling old ones. (Obviously the right thing to do would be to jump and polish off the lot.) (‘DOMPCY?’, p. 267)

However, in this context she also remarks that the best method of corruption is not ‘direct propagation of ideas’ but ‘public action’. She gives as her example the institution of legal structures which fail to be courts of justice and act instead as committees for establishing legal guilt (‘DOMPCY?’, 267. cf. ‘On the Nature of Justice in a Trial’, Analysis, 33/2 (1972), 33-6).

I’m inclined to agree with Anscombe, both on the relative efficacy of public action and promotion of ideas, and on the methods of corruption—brief reflection on our own times provides anecdotal support—but I’d like to know why and how these method work. I’d also like to think about the strategies of resistance that Anscombe’s observations recommend—and perhaps require. This might help us to explain why Anscombe saw her public objection to Truman’s degree—as well, perhaps, as her protests at abortion clinics (for which she was arrested)—as more than mere ‘gesture[s] of protest’ but necessary acts in the face of the possibility that ‘God’s patience [might] suddenly end’ (‘MTD’, p. 70).

On the question of hypocrisy, Anscombe argues that what is evil about pacifism is that it promotes the ‘false hypocrisy of the ideal standard’:

I have very often heard people say something like this: “It is all very well to say ‘Don’t do evil that good may come.’ But war is evil. We all know that. Now, of course, it is possible to be an Absolute Pacifist. I can respect that, but I can’t be one myself, and most other people won’t be either. So we have to accept the evil. It is not that we do not see the evil. And once you are in for it, you have to go the whole hog. (‘MTD’, p. 69)

This brings us to a question about the demandingness of integrity, something that has been central to many of our discussions. And it seems like Anscombe may be offering an unexpected response to that question. Her thought seems to be that there is something hypocritical and corrupting about the setting of an ideal that can’t be lived; for her integrity demands achievability for all.

I want to connect this requirement with Anscombe’s intellectual integrity, or the integrity of her life as academic and person. Anscombe recognised that part of the difficulty around accepting an ethics of prohibition was the accusation of ‘high-mindedness’; the idea that such an ethics, however desirable, just could not be followed. She associates this with a view of Christianity as impracticable, but pure; pacifist, loving, gentle and of Christ as an object of admiration but not a model for living. To this Anscombe is opposed; she describes Christianity as practicable but severe (‘WM’, p. 48). The severity requires the practicability; it would be unjust if Christianity asserted prohibitions that could not be followed but by saints. So Anscombe’s work in philosophy is an attempt to show how such prohibitions could be practicable. This involves a careful, theoretical, assault on the (mis)understanding of the concepts of responsibility, action, intention, desire, mind that she sees as underpinning the thought that ‘Do no evil!’ is an impossible ask. A large part of that task is to show that being causally responsible for something bad happening, even when one foresees that bad consequence, does not imply one is morally responsible for that bad thing. So, if I refrain from doing something bad knowing that if I do so you will do something even more dreadful, this does not make me responsible for your dreadful deeds. As Nowell-Smith points out in his ‘Letter to the Editor’ identifying my intentional actions—as opposed to the mere foreseen consequences of my actions—is by no means an easy task. If my refusal to do my boss’s dirty work will result in your getting fired, how do we distinguish between the case in which I refuse in order to get you fired, and that in which I refuse knowing that you will get fired? According to Anscombe, such a distinction is impossible within the framework of post-Cartesian philosophy of mind. This explains why for Anscombe an adequate philosophy of psychology is a necessary foundation for ethics (c.f . ‘Modern Moral Philosophy’).

[For information about the Portraits of Integrity project, click here]