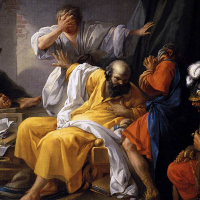 These texts were excellent preparation for Christopher Gill’s talk at York on what we can learn from Stoics about integrity, and what they can learn from us.

There is no word in Greek for ‘integrity’, and no word used as such in Latin. Yet Ancient philosophy profoundly shaped our understanding of integrity. Our discussion began by highlighting three ways in which this was so:

1. The strong emphasis in Plato on psychic unity as a comprehensive virtue, or the mark of the fully or truly virtuous person. All motivations and values are integrated by being jointly oriented towards the good. Such orientation is the ancient understanding of ‘reason’.

2. The strong emphasis in Plato and Aristotle both on the consistency between person/character and action – another important component of our contemporary understanding of the value of integrity.

Finally, we considered the Stoic emphasis on what ‘belongs to you’ (reason, virtue, orientation to the good) and what does not (everything else) as a view that prioritizes integrity, particularly understood as uncompromising adherance to what is right.

[RW] The question of Socrates as a model of integrity (point 3 above) was of particular interest to me, due to its connection with the institutions and action project strands.

Plato clearly means to present Socrates as a paradigm of integrity—a person in possession of all the virtues. However, two incidences from Socrates’ life, referred to in the Apology itself, might lead us to question this. First, his refusal to enter politics and instead to commit himself to ‘the life of the mind’; second, his absenting himself from his duties when he was asked to do something unjust.

Here’s the first relevant passage from the Apology:

Someone may wonder why I go about in private, giving advice and busying myself with the concerns of others, but do not venture to come forward in public and advise the state. I will tell you the reason of this. You have often heard me speak of an oracle or sign … which comes to me and always forbids me to do something which I am going to do, but never commands me to do anything, and this is what stands in the way of my being a politician. And rightly, as I think. For I am certain, O men of Athens, that if I had engaged in politics, I should have perished long ago and done no good either to you or to myself. And don’t be offended at my telling you the truth: for the truth is that no man who goes to war with you or any other multitude, honestly struggling against the commission of unrighteousness and wrong in the state, will save his life; he who will really fight for the right, if he would live even for a little while, must have a private station and not a public one.

This seems to me to be an alarming claim! Surely a person who is sensitive to right and wrong, and who has the wisdom of Socrates really ought to ‘come forward in public and advise the state’. The point is discussed in Vlastos’ ‘Socrates in Vietnam’,  which reflects on intellectuals’ refusal to ‘come forward in public and advise the state’ in the U.S. during the Vietnam war. Vlastos’ concern that such refusal is a symptom of viciousness not virtue seems right to me, but as our Intellectual Integrity conference highlighted, the modern professional academic seems almost completely absent from public life. (Can you name academics who have taken public action against the cuts, the wars, the austerity packages, immigration policy, Guantanamo bay, the ‘surveillance state’?). As Vlastos himself reflects, his productivity in metrics that are judged valuable within the rewards structures of academia – that is ‘publication outputs’ in the form of journal articles – was seriously hampered when he committed himself to the kind of political activities that being an engaged citizen seems to demand. This seems to be a clear example of the ways in which a society’s failure to value the right kinds of things – the fetishization of technical research ‘outputs’ over the broader intellectual virtues – shapes the structures of practical reasoning of individuals within it.

The second point has come up elsewhere in discussions in the integrity project – especially in Sue Mendus’s paper ‘Does being an academic require compromising one’s integrity?’ for our Intellectual Integrity conference. If one finds oneself in a role which calls for one to perform unjust acts, does giving up that role thereby enable you to retain ‘clean hands’? Is it enough for a person in public office to absent himself and take up a ‘private station’. Or are the demands of integrity greater? Is one required to stay in one’s role and refuse to perform one’s duty; to make a public act of protest; to become a whistleblower? There are echoes of this question in Bernard Williams’ discussion of the unfortunate chemist George.

As an illustration of his determination ‘never [to] have yielded to injustice’ Plato’s Socrates tells this story.

But when the oligarchy of the Thirty was in power, they sent for me and four others into the rotunda, and bade us bring Leon the Salaminian from Salamis, as they wanted to execute him. This was a specimen of the sort of commands which they were always giving with the view of implicating as many as possible in their crimes; and then I showed, not in words only, but in deed, that, if I may be allowed to use such an expression, I cared not a straw for death, and that my only fear was the fear of doing an unrighteous or unholy thing. For the strong arm of that oppressive power did not frighten me into doing wrong; and when we came out of the rotunda the other four went to Salamis and fetched Leon, but I went quietly home

Socrates’ going ‘quietly home’ strikes me as inappropriate. But then, what should he have done?

Though Socrates’ case has the drama of life-and-death, this kind of situation is commonplace. I know that being as a certain place at a certain time will mean I will be called upon to do something I think is wrong. So, I make sure I’m elsewhere, and that the responsibility falls to someone else. Is this really an expression of integrity?