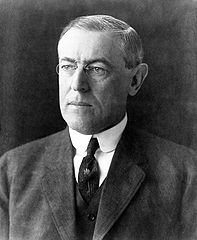 Woodrow Wilson was President of the United States at the time of the First World War and it was during that war, and particularly in relation to the peacemaking afterwards, that he became a world figure. Having led the United States into the war in April 1917, as he said to make the world “safe for democracy”, he set out his peace programme in the Fourteen Points address of January 1918 and subsequent speeches. He called for a non-vindictive settlement that recognized the principle of national self-determination and for a league of nations that would make peace permanent by guaranteeing the security of all states, whatever their size or relative power. In October 1918, the German government accepted this programme as the basis for peace and in the November armistice the Allies also did so. Wilson crossed the Atlantic to participate personally in the Paris peace conference, thereby becoming the first U.S. President to leave North America while in office. He did not leave France until the Treaty of Versailles had been signed in June 1919. (No later President has been out of the country for anything like as long.)

To the great majority of Germans and many of Wilson’s most fervent supporters at home and abroad (including anticolonial nationalists), the Treaty of Versailles was a far cry from the peace Wilson had called for. Disappointed liberals like John Maynard Keynes and the young American diplomat William C. Bullitt attributed the outcome to Wilson’s personal failures and vanity. The treaty did, however, include the establishment of the League of Nations and Wilson argued that this would transform international relations and secure permanent peace. Participation of the United States in the League required approval of the treaty by the U.S. Senate where Wilson’s Republican opponents had a majority. In an effort to rally public opinion, Wilson embarked on an extensive speaking tour across the United States, which was brought to an end when he collapsed physically. Shortly afterwards, in October 1919, he suffered a disabling stroke.

Woodrow Wilson has been widely seen as an idealist, passionately committed to the vision of a new and better world order. To many at the time and since,he was a hero who sacrificed his own health to this cause. Others have seen the idealism as utopianism, ultimately mischievous in its effects. Wilson’s character and background has strengthened this view of him. He had been an academic, only entering politics at the age of fifty-three, and he retained a somewhat professorial demeanor. The son of a Presbyterian minister and of a mother who was the daughter and sister of ministers, he was steeped in the Christianity that was clearly important to him.

There has, however, always been another view of Wilson, which is that of many of his political opponents – that he was an unprincipled opportunist who espoused idealistic causes not out of conviction but for his own political ends. Patrick Devlin, a distinguished British jurist and committed Catholic, saw Wilson as “under the control of an ideal” that “sought to introduce into international affairs the Christian ideal of peace upon earth for men of goodwill to be brought about through the Christian ethic of service to others” (Too Proud to Fight, p. 678). But, in his very thorough study of Wilson’s conduct of American neutrality between 1914 and 1917, Devlin saw as problematic Wilson’s approval of a secret agreement in February 1916 between his friend and aide Colonel Edward House and the British Foreign Secretary Sir Edward Grey that seemed to promise U.S. entry into the war on the Allied side at a time when the President was publicly assuring the American people that he would do all that he could to keep the country out of the conflict. I have included in the readings Devlin’s treatment of this episode because it may be seen as reflecting more directly upon the issue of Wilson’s personal integrity than does the idealism of the goals he sought to achieve.

[For information about the Portraits of Integrity project, click here]