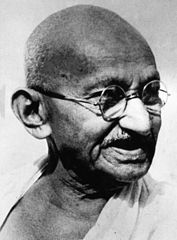 M.K. Gandhi, An Autobiography or The Story of My Experiments with Truth, various editions, and online at CWMG, Vol.44, item 115ff, pp.88ff.

In October 1901, Gandhi left South Africa and spent a little over a year in India before he resumed his fight for Indian rights in the Transvaal. While in India, his second son, Manilal, fell ill with typhoid and pneumonia. A doctor confirmed that Manilal’s life was in danger, but that there was no effective treatment other than to keep the patient comfortable and strong in the hope that his immune system would fight off the infections. Eggs and chicken broth should be given, he advised. However, the Gandhis understood vegetarianism to be a core element of their Hindu beliefs, and thus Gandhi was faced with a dilemma. As the situation was presented to him, he had to make a choice between following his faith and the principles derived from it, and between departing from these very principles in order to enhance his son’s chances of survival. The doctor explained that he had treated many Hindus, who in situations like this would often temporarily suspend their beliefs and follow common sense instead. However, Gandhi felt that it was precisely ‘only on such occasions that a man’s faith [was] truly tested’ (Autobiography, Part III, Section 22).

The burden of responsibility weighed heavily on him, because Manilal was too young to take this decision. ‘If the boy had been grown up, I should certainly have tried to ascertain his wishes and respected them. But here I have to think and decide for him. Rightly or wrongly’, he concluded, ‘it is part of my religious conviction that man may not eat meat, eggs, and the like. There should be a limit even to the means of keeping ourselves alive. Even for life itself we may not do certain things.’ Gandhi proceeded to personally administer to his son the ‘hydropathic’ treatment developed by Louis Kuhne (1835-1901), a German author, who explained disease as the consequence of too many toxins entering the body. The treatment consisted of various bathing-related practices, which were meant to help detox the body by stimulating the lower abdomen. Gandhi also put Manilal on a diet of orange juice and water, because he believed in the healing effects of fasting. Initially Manilal’s condition did not improve, and Gandhi reflected: ‘What right had the parents to inflict their fads on their children?’

We must not envision Gandhi in this situation as the dogmatic father who with unshaken determination imposes his convictions on his son. If we follow his own account, which is the only one we have of this incident, he was agonizing over his decision: ‘My honour is in Thy keeping, oh Lord, in this hour of trial,’ he repeated to himself, ‘Ramanama was on my lips […] with my heart beating within my breast.’ Gandhi was afraid. His anguish reflects how, in a profound sense, he did not know what to do, but in light of the fact that there was no obvious solution that would guarantee success, he was willing to put his faith – ‘rightly or wrongly’ – to the test, fully aware of the possibility that he might err. In the end, Manilal’s fever broke and he recovered. ‘Today Manilal is the healthiest of my boys. Who can say whether his recovery was due to God’s grace, or to hydropathy, or to careful dietary and nursing? Let everyone decide according to his own faith. For my part I was sure that God had saved my honour, and that belief remains unaltered to this day.’

According to his autobiography (written in 1925), Gandhi’s life was punctuated with experiences not unlike the one narrated above, Manilal’s illness and cure. In these situations, Gandhi’s faith was tested to the point that the very meaning of his faith gained much sharper contours and that, as a result, Gandhi’s commitment to his faith became a matter of reflection and deliberation, leading to a deliberate commitment to make his subsequent course of action a manifestation of his faith and, over time, to live a life that bears witness to the truth of faith. This is not, however, an ‘application’ of a pre-existent dogma, but a creative process in which both Gandhi’s faith and his self-understanding acquire greater concreteness and clarity. The path travelled is a path animated by faith, a quest, but it remains an intensely personal journey, which has significance ‘only’ as an ‘illustration’, an example, an ‘experiment with truth’– and yet it is only because such lives are lived that others can follow their examples.

It is this process – a quest made up of trials and commitments, in which life is gradually shaped so as to become as perfect a witness as possible – to which Gandhi was fully committed. Even his most outspoken critics do not fail to acknowledge that ‘as a man, he is most remarkable for making every day, perhaps every minute, a matter of reaching forward, for never settling in any one place in his long, intricate spiritual journey. He never gave up.’ (Jad Adams, Gandhi: Naked Ambition, p.283)

A major formative influence on Gandhi was his life-long study of the Bhagavad Gita, a 700-verse Hindu scripture which was composed at some point between the 5th and 2nd Centuries BC. The narrative setting of the Gita is a battlefield: the armies of the Pandavas and the Kauravas confront each other just before the onset of a decisive battle, when the Pandava prince Arjuna is beset by doubts. He looks at the army of his enemy and recognizes relatives, former teachers, people he loved, and ponders the costs of war. Yet justice is with the Pandavas and as he hesitates, his charioteer, who reveals himself as Krishna, counsels and advises him that he must not shirk his duties as a righteous warrior; he must fight. It is ironic, perhaps, that the key influence on the champion of non-violence should be a text that admonishes the righteous warrior’s reluctance to engage in battle, but Gandhi read the Gita as a spiritual allegory. At stake was our own soul, and Arjuna represented man’s higher impulses struggling against evil. The Gita taught Gandhi that in this battle, one could not withdraw or not act. In fact, in the quest for truth, selfless, ‘dis-interested’ action was equivalent, if not superior, to ascetic withdrawal. On the basis of the Gita, Gandhi was able to interpret the path of action – of being a force manifesting dharma in the furnace of social and political life – as an equivalent to meditation, asceticism and withdrawal. Self-negation and self-control were to be achieved not outside, but within society while confronting its temptations. The public service that Gandhi wished to offer in his campaigns cannot be separated, therefore, from his own spiritual quest and transformation – these two spheres of his life are the two sides of the same coin.

Under the term satyagraha, the ‘force born of truth’, Gandhi thus developed ‘integrity’ as a method of spiritual, social and political activism. Non-violence, ahimsa, was its key feature, because violence and the threat of violence instill fear, and fear prevents us from seeking, revealing and facing truth.

Gandhi’s life provides us with a wealth of material as we explore the possible meanings of ‘integrity’. As we study his life in search of instances of ‘integrity’, we are invited to consider many important questions. Is integrity the predicate of a momentary action or of a life? Is integrity an ‘either/or’ or a ‘more/less’ attribute? Can integrity, as Gandhi seemed to imply, be used as a weapon? What is the relation, if there is a relation, between integrity and truth? And if we consider the scandal Gandhi caused with his late brahmacharya experiments, which he conducted by asking his nineteen-year-old grandniece to share the bed with him, we may also ask whether there is a perversion of integrity, a ‘too much’ of integrity.

The readings for this month are all taken from primary sources, i.e. from Gandhi’s own writings. The Introduction to the Autobiography outlines Gandhi’s understanding of ‘truth’ as a ‘sovereign principle’, as God, and it explains Gandhi’s approach to his life narrative as an account of spiritual progress towards truth, with ‘experiments’, trials and temptations as key stepping stones. The other sections listed from the Autobiography are examples of such formative ‘experiments’, which led to lasting commitments such as e.g. the brahmacharya vow. The readings on satyagraha explain the theory and practice of satyagraha and give instructions for the volunteer satyagrahi . Two letters are added which illustrate how Gandhi wrote openly about his late brahmacharya experiments. Finally, Gandhi’s first book, Hind Swaraj (Indian Home-rule, 1909), is instructive in that it outlines his diagnosis of the situation in India under British Rule and his vision for a free India.